RipCityPilot wrote:According to Wikipedia, Spoelstra was born in Evanston, Illinois.

Yup, that discussion began on PN on June 19th. When it comes to being a "native," apparently it's all about perspective and/or choice. I guess we'll just have to ask Erik where he's from..... 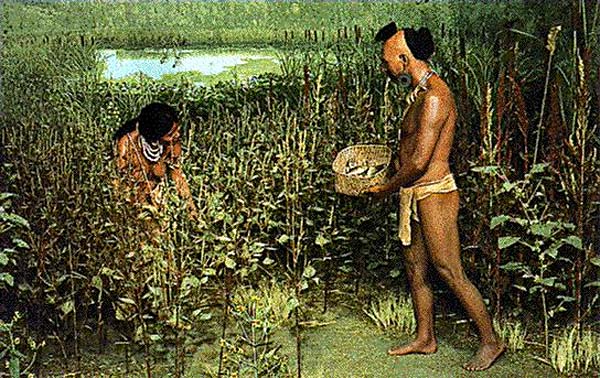 Saw this full page congratulatory salute to Erik as part of the Rise campaign in the Sunday Oregonian, and just realized that most on PN do not get the dead tree version of the Oregonian.

The headline to the salute is,

"Today, more than ever, the world needs heroes. University of Portland." 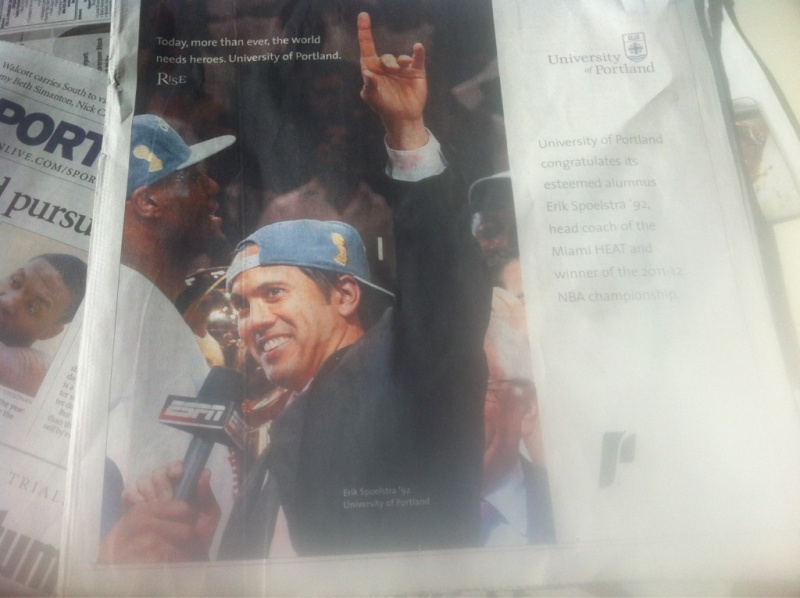 Melodramatic, yes. Speaking from experience, sometimes one needs to sensationalize a bit to raise awarness and make the sale. Here, the "sale" is after the "ask" to give to the Rise campaign. (So we're really not talking about basketball here, but about making people aware of UP).

All caps? Again the anwer is yes. In recent years HEAT marketing has generally put the team name in all caps and in a specific font. There have been variations on that style (I believe this year's championship logo is an example), but uniforms for players and cheerleaders, and the website and printed publications show the team name as HEAT the majority of time.

Maybe we should be the PoRtlAnD PiLOtS!

You know, I think you may be onto something there. I'm sure the marketing department would be able to use your example and point out how each letter represents certain parts of the campus, the community, the city, and the state.

I can already envision the high rise buildings, the bends in the rivers, the tall trees, the cross on the chapel, and the O for the State of Oregon. Man, that's good. Hopefully someone from marketing sees your example and runs with it!

And there could be an intern whose sole job is to monitor all media for incorrect formatting of the name.

Home for a few days

Eric had a chance to sit down with the Tribune staff recently:

Had Miami not won the title, Spoelstra would have shouldered the blame. Even in victory, many will credit the talent base led by James, Bosh and Dwyane Wade.

But Spoelstra kept things on an even keel through a season that had its speed bumps, evenhandedly guiding the Heat to the top. It was a wondrous job of handling egos and putting his players into the right position to succeed.

Spoelstra, 41, was never in danger of being fired, though that was the perception of many. The former point guard at Jesuit High and the University of Portland cut his teeth under team president Pat Riley, then the Miami coach, as a video assistant in 1995. Spoelstra worked his way up the ladder until becoming Riley’s predecessor two years ago.

Um... Riley was HIS predecessor.


Unless... Did Riley come back and leave again?

Another very complimentary article about Spo from TODAYonline:

Dwyane Wade likens him to a mysterious comic book hero who lurks in the shadows. "He's like Batman," the Miami Heat star player said of his head coach Erik Spoelstra, in an interview with ESPN last year. "He goes into his cave. Nobody sees him."

"Very early on in his career, we all knew he'd end up where he is," former Heat coach Stan Van Gundy said in an ESPN interview. 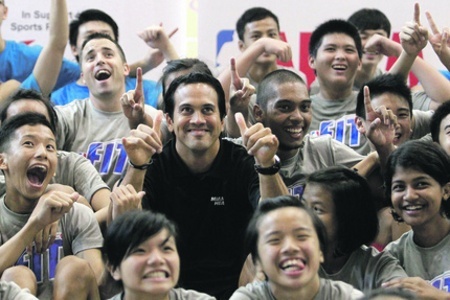 I have to admit to watching the last quarter of last night’s game between the Heat and Spurs….I really think they should be called the Fits and Spurts, but I’ll save that for another rant.

Wow, how did NBA ball become so ugly?  I cannot get enough of NCAA ball, and watch nearly every game possible during the tournament, but jeez, I could barely stand what I saw last night.  Even the crowd is strange (in my mind).

Like so many Heat fans that left the arena early, I almost turned off the TV with the Heat down by five with less than 30 seconds remaining, but was glad to see James and Allen make the desperate 3-pointers to take the game to overtime and an eventual Heat win.

My golfing buddies think I must be the only man in America rooting for the Heat….but as I try to explain, if there were a way for the Heat to lose and UP grad Eric Spoelstra to win, I’d be all for it.

I've given up trying to root for Spoelstra but against James.  I've gone all in rooting for the Heat.  Not very many Miami fans outside of Miami.

blacksheep wrote:I've given up trying to root for Spoelstra but against James.  I've gone all in rooting for the Heat.  Not very many Miami fans outside of Miami.

I've actually forgiven James for being so self-centered and childish as a younger man/child, and try to point out to others how he's developed into a leader and team player....my words usually go unheeded by others.

Oh, and let's not forget the Pilots have a significant contributor to the Spurs.....Ben Sullivan.

Ben graduated from Lake Oswego High School in 2002 and played one year at Cal.State Northridge before transferring to UP.  He earned the All-Academic Performance award in every year at UP and was voted Team Captain his senior year, and graduated in 2007

After college, Ben played professional basketball overseas with stops in China, Germany, as well as Chile. He began his coaching career in the fall of 2009, where he coached in the Lake Oswego Youth Basketball Association.

Ben then moved back to UP in 2010 as video coordinator, as I recall, and in 2011 was the assistant coach at Lewis & Clark College.

He is currently working in the NBA doing Player Development for the San Antonio Spurs!!  So, I'd say the resurgence of "old" Tim Duncan has a lot to do with banging with Ben!

DoubleDipper wrote:I have to admit to watching the last quarter of last night’s game between the Heat and Spurs….I really think they should be called the Fits and Spurts, but I’ll save that for another rant.

Wow, how did NBA ball become so ugly?  I cannot get enough of NCAA ball, and watch nearly every game possible during the tournament, but jeez, I could barely stand what I saw last night.

I agree. I saw the final minutes of regulation and the OT last night, the first NBA playoff I've watched. That was some bad basketball.

Seems like the NHL game gets better in the playoffs (Bruins and Blackhawks tonight!), while the NBA game gets worse.

Congrats to Coach Spoelstra on another championship.

I gotta say, if the NBA season were as exciting as the last two games of the NBA Championship, there'd be a lot more interest.

Tough to compare players in different eras, but LeBron is certainly one of the BEST.

Bill Russell played in something like 10 game sevens, including 5 championship game sevens....and he has 10 rings....just saying longevity and the overall piece of work means a lot in my book.

up7587 wrote:Congrats to Coach Spoelstra on another championship.

Coach Spo and the Miami Heat are probably the most scrutinized and over analized team team in America.

By all appearances Spo has handled the pressure VERY well.

It was good to see the microphone handed to Spo BEFORE Pat Riley tonight....maybe he's finally being given credit for the work he has done.

San Antonio was surprisingly good....it was a very good series that I honestly thought the Spurs had won when they were ahead by 5 with 21 seconds left in game 6.  The Spurs were certainly the sentiment favorite....at the sports bar tonight I was one of only three Heat fans amongst a sea of black and silver covered Spurs fans.

DoubleDipper wrote:.....I honestly thought the Spurs had won when they were ahead by 5 with 21 seconds left in game 6.  The Spurs were certainly the sentiment favorite....at the sports bar tonight I was one of only three Heat fans amongst a sea of black and silver covered Spurs fans.

One of the big discussion items at the bar was why the Spurs didn't foul when up by 3 points with just 7 seconds to play in regulation in game 6.

When the first 3-point attempt was missed there was a fight for the rebound inside the arc....why didn't the Spurs hammer the rebounder and make it a free throw game....the odds would certainly have been in the Spurs favor, one would think.

Instead the ball was kicked out to Allen for the 3....and the rest is now history.

Haha, I just saw this:

After game 6, Spurs coach Gregg Popovich answered a "foreigner's" question about the strategy of fouling.....his reply, "That's a European question."  Later Pop said, "That's not how it's done in America."

I guess conspiracy theorists could point to Commissioner David Stern telling coaches not to foul with 3 seconds to play because nobody wants to watch a free-throw game....instead ABC needs the TV drama of 3-point shooting.....

I would prefer to think the conspiracy theory is correct rather than think NBA coaches are so ignorant they don't realize 2 free throws won't beat you when you're down by 3 points.

I didn't do a fact check on this, but it sounds about right.....

Commenting on the back-to-back win of the NBA title by the Heat, it was mentioned that it's "easier" to repeat in the NBA than in the NFL or in MLB.

In the past 34 seasons, only 9 franchises have won NBA titles.

I don't think it proves much....but it does show there is now much more parity in the NFL and MLB than there once was...but the argument by the commentator that it was much "easier" for the Heat to win just doesn't make sense, to me.

The fact that only 9 teams have won doesn't make it easier. If you are not one of the nine it 's harder.