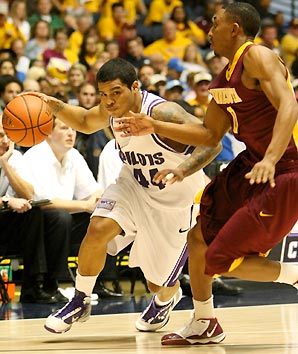 T.J. Campbell (left) and the Pilots will test their progress under Eric Reveno as they host Gonzaga on Saturday.


Reveno has Portland on the rise

When Eric Reveno was considering whether to take the head coaching job at Portland in 2006, he sensed that some of the friends he consulted, including Mike Montgomery, who Reveno worked under at Stanford, were against it.

"It is like when you bring a fiancé home to meet your family," Reveno said, "They aren't going to say they don't like her, but you can tell."

There wasn't much appeal to the Portland job back then -- it had been eight years since the Pilots finished above. 500 -- but there is much more to like about the program now. After a 19-13 finish a year ago, the Pilots have already upset Oregon, UCLA and Minnesota this season. When they briefly appeared in the AP poll after defeating the Gophers, it was the first time they'd been ranked in more than 50 years. While the team can be maddeningly inconsistent -- two of their five loses were to Portland State and Idaho -- there is a sense that Reveno has the program on the uptick.

"Even here in Portland, we could walk around and people didn't know who we were or they got us confused with the team at Portland State," senior point guard T.J. Campbell said. "But we're changing that now."

Reveno saw the possibility of change when he took over the program after eight seasons as an assistant coach at Stanford. A new president and athletic director had been hired from Notre Dame, "and they both understood how athletics can enhance a university's profile," he said. But financial support from the school's higher-ups wouldn't alone turn the program around; Reveno had to unearth recruits who were undervalued by other programs and willing to come to the Rose City.

"[Portland] is not a glamorous choice and I am not some charismatic, dynamic guy," said Reveno, who was a workman forward for Stanford in the 1980s. "The kids we went after may not have been complete players, but they were all willing to work hard. We have probably overrated some players compared to what other schools thought of them because they had the work ethic."

Campbell is one of those players. His only scholarship offer coming out of Sunnyslope High in Phoenix was to play football at South Dakota. "I saw him play [at Glendale Community College] and I just thought he was really, really good," Reveno said. "But you had to get over the fact that he was maybe 5-foot-8."

Having a star point guard is one part of the formula that Portland, like so many mid-majors before it, has used to find success. Experienced players (the Pilots top eight are upperclassman) + dynamic lead guard (Campbell) + accurate three-point shooters (Jared Stohl, 44 percent, Campbell, 42 percent) = one dangerous team.

"The veterans part of it is very true," said Reveno, who has recruited players who hail from Canada, Germany and Japan. "Take us compared to UCLA. [The Bruins] are so much more talented, but they are young. Think of all the practices and games our players have had together. We were ahead of them on experience."

Reveno set a goal of competing with Gonzaga for the West Coast Conference title by his fourth season, and he will find out this Saturday if he achieved his goal. The Pilots host the Zags, and while Gonzaga is, on paper, the better team, that doesn't lessen Reveno's hopes.

"It's a tough conference and our No. 1 objective has always been to win the WCC," Reveno said. "That is why I would say that, while there is a sense of satisfaction for what we have done so far, we have not arrived. But I will say that we are worth keeping an eye on."