I've been looking forward to this game since our schedule was released, and I figured it would be one of Idaho's best non-con matchups of the season. I didn't figure on you guys being nationally-ranked! The Pilots will be the first nationally-ranked non-conference team to visit Moscow since the 1960s.

Congratulations on your success, and it's going to be one heck of a throwdown in Memorial Gym.

I was hoping for a Kibbie Dome matchup.

It's a disgrace to our program that we don't have a real hoops arena to play this game in. Nobody figured on our football team actually being good enough to go bowling this year, and they can't take up the turf in the Dome now until after that game.

We have a nationally-ranked marquee non-con matchup and it's going to be stuck in a 1,500-seat shoebox. Ridiculous.

Well, at least it's moved for a good reason. As a former Pullman resident I know what UI football has been through for the last 2 decades or so. You guys have every right to be psyched for a bowl game!

Interesting that you guys are coming to Portland later in the month.

Is that your blog by the same name?

Our defense has been very solid all year long, but our bugaboo has been turnovers. Lots of them, and I mean like one of the worst in the nation. We are very deep, rotate a lot of guys and have a lot of new guys, so it seems to be getting better as the team gels, but it's still a huge worry against a team as solid as the Pilots.

But if we give you guys the ball on stupid turnovers 15 times, it won't matter how many shots we hit.

Apparently we have a bubble to be burst this game...

Idaho will be a stiff challenge. They are considerably better than Eastern Washington and we had a tough enough time with that one. Pilots better be ready to play. I don't want to call it a "trap game" because I think that term is silly, but it is definitely a game that makes me nervous.

To tell you the truth, tonight makes me nervous...

Purplegeezer wrote:To tell you the truth, tonight makes me nervous...

Oh me too. Of course, I always get nervous.

But mainly I want to see how the guys will respond to the ranking, all the attention, etc. I really hope they will be able to relax and just play their game. We had an awesome weekend and put ourselves on the map, but we have so much work we still need to do... and it starts tonight! Gotta get the W, and it would be lovely if we just rolled them.

I decided to check out the venue for sunday. some things reeked of Howard Hall or the Stott Center (1500? Really?)

but it actually looks like a pretty cool place. 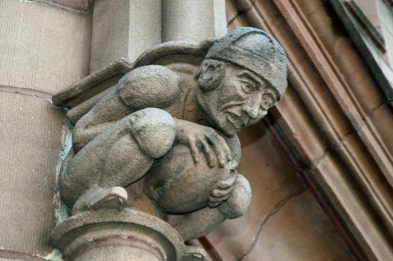 Kind of reminds me of a less crumbly Howard and a movie.... 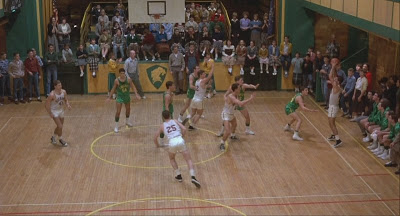 I think this is my second Hoosiers reference in the last week... And it was on last night... haha I've missed basketball...

Yeah, if we have to play in a 1,500-seat venue, Mem Gym is definitely the best of those. "Memorial" refers to World War I and the building is now a National Historic Landmark. It's a beautiful old throwback.

There's actually something like 1,800 seats in the place, but the fire marshal limits capacity to 1,500.

Speaking of goofy venues. Did anyone see the photos of the ballroom venue in Cancun for the Cancun challenge tourney? Hysterical. 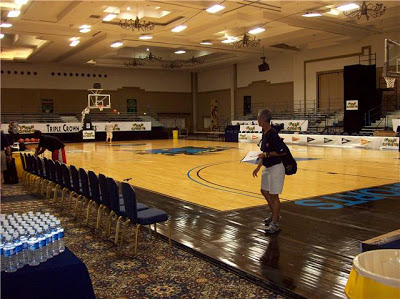 It looks like a place to rent for a Mexican wedding. It was so funny to see highlights of dudes dunking in this place!

Haha, yeah. Apparently the floor was in absolutely horrible shape, too - players were talking about dead spots the size of small cars.

Yeah, and really big cracks at the floor seams... But then again, didn't the old Boston Garden have that?

A throwback game in Howard might be kind of cool if the bleachers weren't condemned...

What can we expect from Idaho (besides "a tough game")?

What is this SP11? You gonna stand me up in the chatbox to pay me back for missing the PSU game?

You're durned right! Since it's an away game, you might find more people in the easier-to-find chatbox, though.

It'll depend on how much I can sleep before gametime and how good i feel about my finals... it's only 2 hours, right?

After the last game, I'll make sure that I have a drink in my hand this time!

I've also got a game preview, mostly focusing on the Pilots.

I'll write some more in the morning, but what you can expect from us is a lot like what you expect from yourselves.

We shoot lights-out like you guys, slightly worse inside and slightly better outside (48.8% overall, 45.3% from downtown).

One difference: we run the floor like crazy and have a deep bench, as nobody averages more than 29 minutes and we have 10 guys who see significant playing time. We have the 76th-quickest tempo in the NCAA, averaging 74 possessions per game.

Thanks VandalNation for the reports, good luck. May the best team win!!!!