Dani F has now scored 31 goals in her UP career. Checking the website tonight that puts her tied for 9th on the alltime list with Natalie Budge and Lindsey Huie.

12 games into her sophomore season.

What is refreshing about the Pilot sharpshooters is that they don't seem to care who scores as long as the team wins. Going back at least as far as Christine Sinclair, the scorers deflect the acclaim to the team, to the assist, to the defense. They spread the glory and put individual achievement in a team context. In short, none of them behave like NFL wide receivers.

Well... haha NFL wide receivers use that ply to make themselves more marketable and bring in more $$$... I'd celebrate like that too if it earned me endorsements...

Sophie UnoTres is my favorite player.

If she starts referring to herself as "Sophia," we should all be worried...

Well, this is kind of convoluted, but the UP nominee is Danielle Foxhoven.

A total of 429 female student-athletes, spanning NCAA Divisions I, II and III, were nominated for the 22nd annual NCAA Woman of the Year award.

The award honors graduating female student-athletes who have distinguished themselves throughout the collegiate careers in the areas of academic achievement, athletics excellence, service and leadership.

Each year, every NCAA member college and university is encouraged to honor its top graduating female student-athlete by submitting her name for consideration.

Conferences then select one or two women from the nominees to represent their conference. Those names are then sent to the Woman of the Year selection committee, which chooses the top 10 honorees in each division.

From among those 30 candidates, the selection committee determines the top three in each division and announces the top nine finalists in September. Finally, members of the NCAA Committee on Women’s Athletics will vote from among the finalists to determine the 2012 NCAA Woman of the Year.

The top 30 honorees will be honored, and the 2012 NCAA Woman of the Year winner will be announced, at the annual ceremony in Indianapolis on Oct. 14.

Go to Germany to latch on with pro team.

Dani's blog has an update about going to play in Germany.

Not so good news from Dani. She didn't latch on at Essen, and is now contemplating her next move.

The good news is she is staying with Elli there.

In a follow-up to my August 9 post, the NCAA released this today (edited):

PORTLAND, Ore. --- Former Portland Pilots women’s soccer standout and recent UP graduate Danielle Foxhoven is one of 30 finalists for the prestigious NCAA Woman of the Year award. The 30 finalists were selected from a group of nearly 430 nominees.

The top 30 women are composed of 10 honorees from each NCAA division and span various NCAA sports. In September, three finalists will be chosen from each division to form nine finalists for the award. The 2012 Woman of Year will be announced and the top 30 women will be honored during an Oct. 14 ceremony in Indianapolis, Ind.

“Being a finalist for the NCAA Woman of the Year is an unbelievable honor,” said Foxhoven. “All of the candidates for this nomination are incredible women who have put in an incredible amount of effort both on and off the field, and to have my name amongst them is a true honor.

“This award is not about winning, it is an award to say thank you to the athletes who inspire and I would like to use my nomination as an opportunity to represent my conference, my school, my team, my family and myself.”

Referring to my post above; tonight was the banquet in Indianapolis to award the NCAA Woman of the Year award. Something tells me that if Danielle had won, we'd know by now.

Regardless, congratulations Coach Foxhoven; you're definitely OUR NCAA Woman of the Year!!

This picture was taken this evening by Director of Soccer Operations, Whitney Stipetich: 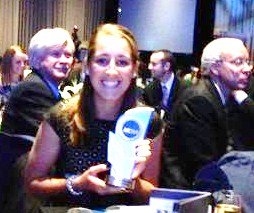 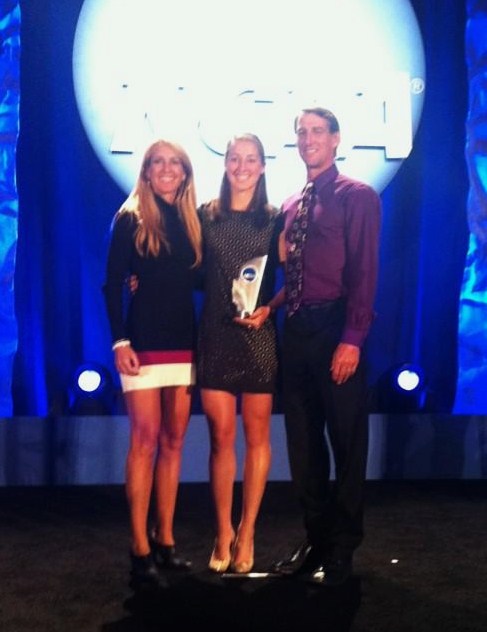 Um, is she standing on a platform? Who does she think she is, Tom Cruise?

Welcome to Russian professional soccer.
She didn't have a phone. She had to go into town to even send email. This was a crash course in self-reliance.
"They gave us Internet and they paid for it," Foxhoven said with a chuckle that betrayed the impending punch line. "Which means they didn't pay for it, and we never got it." 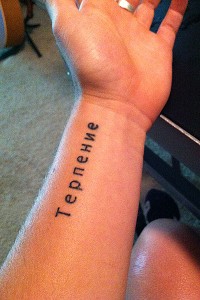 I recently thumbed through a book titled, Under the Lights and In the Dark: Untold Stories of Women's Soccer by Gwendolyn Oxenham, the former Duke University player.

The book is now on my Christmas wish list because the second chapter entitled, "Welcome to Russia," chronicles Danielle's experience in Russia with FC Energiya Voronezh. Foxhoven describes her physical and psychological abuse from the team's owner/head coach, including being forced to take vitamins, which she later learned were steroids.

During her six-month contract, Danielle scored six goals in nine appearances. Shortly after, FC Energiya Voronezh declared bankruptcy, and she moved back to Portland...I don't know what she is doing these days.

EDIT: Apparently you don't need to actually buy the book to read about at least some of Danielle's horrible experiences in Russia, they are contained in this excerpt from the book by the author, Gwendolyn Oxenham:
https://www.si.com/soccer/2017/10/25/untold-stories-womens-soccer-excerpt-danielle-foxhoven-russia

Dani was back in Portland after that escapade and was training and helping out with the UP team.


I told her about Mrs Geese’s experience in Russia and the Ukraine as a grad student and how similar her experiences were 40 years earlier.

Dani blunted out “ why didn’t anybody tell me this before I left?”