USD comes from behind in the second half to defeat LMU. Final score: 62 - 56.

I'd just like to say that the first half of the USF-Pepperdine game is probably the best basketball I've seen played this year. Really, just beautiful basketball.
_________________
V-I-C-T-O-R-Y!

That's ok I'm already writing from the bottom of the Canyon

I wish i had a winter cabin in Spokane, opp's I mean PORTLAND

, OH WELL I'M OFF TO RUN THROUGH TRAFFIC ON THE FREEWAY, AND LISTEN TO MARK JACKSON(ex-kNICK) BADMOUTH SHAQ BEHIND HIS BACK IN DENVER VS UTAH PRO GAME.

I GIVE UP , I WISH JAMIE Z. (NEW COMMISH) WOULD GET THE INTERNET SH@T CORRECT. IM ABOUT READY TO JUMP IN THE GRAND CANYON.

THIS AN THE PRE-SEASON ALL -ACESS FLUBUB ON THE NEW\'S CONFERENCE THEN PROVES THAT HE IS WAY TO YOUNG AND INEXPERIENCED TO BE IN HIS POSITION. NEXT YEAR LET\'S HAVE A 17 YR OLD BE ONE OF THE NEW COACH\'S IN THE LEAGUE.

I JUST WISH EVERY SCHOOLS FANS FROM THE WCC WOULD STOP LICKING HIS FEET. THE KID HAS WAY TO LITTLE EXPERIENCE,AND NEEDED SOME MORE SEASONING AS A ASSOCATIATE COMMISH IN PAC-10,BIG 10,ETC...LET\'S JUST SAY ,HE IS WAY OVER HIS HEAD. HE SHATTERED THE GLASS ON HIS WAY THROUGH HIS SO CALLED \"GLASS CEILING\".

CAN YOU TELL IM A LITTLE P\'D OFF AT THAT LITTLE PUKE.WHY CAN\'T HE AT LEAST GET SOME COMPETENT COMPUTER OPERATORS AND SUPPORT STAFF.

WHAT A LOSER, THANKS JAMIE Z FOR RUINING MY EXPERIENCE. THAT\'S STRIKE 2 YA LITTLE SCUM BAG!!!

Scumettes want to be in the \"Pac-11\", why don\'t we just transfer to the big-west to get away form commish\'s terrible media blubber\'s when they leave. I\'ll miss them so much

,if they were not so

awful in almost every other sport in their athletic dept. And don\'t forget their academic rep is right up there with Stanford

My sound was terrible.

Me neither, In fact I am impressed. There is even some replays (not much, but there are replays). OK, the audio quality drops at time but the sound is still there.

Now Geezer and Stoney need to hire some . . . uh . . . distraction for the Waves tonight.

Jacket I got to see the last 25 second's courtesy of Jamie Z. I think it may have been the disturbance from Area 54 in New mexico,lol.
I can't wait to CRUSH the wave's , instead of remember the Alamo. It should be remember last years OT loss, with the last shot being our worst starter last year running down the lane with 8 second's to go. If there's one "live" in game fan I despise as much as the Zaggette it's a Malibu Barbie or Ken with their little orange polo or sweater on . The women with their artificial boobs and liposuction,dermabrasions,etc. and the men with their tanning bed "tans' and extend pill's from late night TV,lol.

I think I have found my new "calling" . What little I heard of that announcer he was a real stinker. I hope he's not related to anybody I like. "The Pilot's Men's BB team is getting an early jump on traffic"

I don't want to break that bad new's to that Knucklehead but the team is staying less than 10 minutes away. When I was in Vegas the traffic was about 8-10 block's away on the strip on Friday Night.
What a keeper,he must have went to Gonzaga's Broadcast's School and studyed under that great comentator Ehlo I mean "ELRoY".

I'm so craBBY , I can't sleep. I think I'm gonna go over to the Zag board and use one of my ten name's to talk to each other how good Josh is. How Daye could start in the NBA today. Pew should be in the runnin for National COY for losing to Memphis,PSU,Utah,etc,etc. Then my other name could mention how IRA could beat Dwight Howard in the "Slam Dunk" contest. (Little know fact about Ira, he's older than both Howard and Lebron,geez ,get a job or become Mormon old man. My other persona could mention about 3 pt a game Rob should probably be preseason all WCC at center next year. talking to my other persona who could gleefully aggree how Foster could start on any other team in the conference.

You've heard of suicide by cop, with Mesa it's suicide by ever,ever reading or posting on the Zag Board again.I can have better interactions with my dog while watching the WCC game's.

WHAT'CHA THINK, I DON'T thing the wave's will be a cakewalk. I'm getting nervous already

Well they say beating a team 3 times in a year is a difficult thing to do...

But THEY probably work at ESPN and don't know their @ss from a hole in the ground....

I forget what time the strip bar's close. At least by then maybe Stonehouse,Geezer,Clay and Nut will get on the puter to give us their insight.

Traffic sounded like heck for the Pilot's accross the connecting crosswalk over to their rooms in the Orlean's hotel,LOL. Geezer probably had to rent a golf cart to make it all 400 yard's.

Hmm, I don't know about that.Maybe??? I better not get there for a one and done,that would stink!!!

Yeah you can alway's count on me and him to take PN to a new low.lol

I forgot was there still time on the clock when he was crying? If so I hope they had the ball boys/girl's get out there and clean up all that liquid on the court from his tears.lol
Could some one please E-mail me a picture of him crying with Pee-yew consoling him after. I want to change my avatar and make a 8 by 10 foot poster on the side of my house.

Oops! I put this on the other thread. Here's the pic of Morrison being consoled: 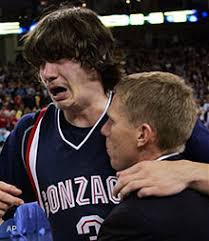 First off, the bars NEVER CLOSE. they just offer specials after 2:00AM.

The most impressive thing about last night was Dior Lowhorn. Not just the points. But everything about his game. He was a man amongst boys. When he gets a full roster around him next year, they will be a lot to handle. Right now he's the best athlete in the conference.

Second, as the score might indicate, neither team played much defense. I think the pilots will get the threepeat unlessvthey implode.
Otta go- my massage appointment is soon

It's been about 4 hours, so it must be a really thorough one...

MesaPilot1 wrote:Yeah you can alway's count on me and him to take PN to a new low.lol