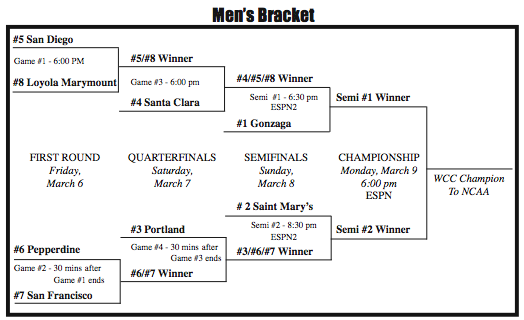 Looks like a rematch with St Marys on Sunday evening to me...

Two late starting games too.... Haha I hope everyone, uh, makes it to the game, at least partially upright

BEAT 6 or 7 seed, Then skim by St Mary's as TJ take's Mickey McConnell to school and scores 32 vrs McConnells 6. Play Gonzaga to the wire. Ravio takes the ball to the hole with 10 second's left,puts up a finger roll. It looks like it's rolling out,but BJ Porter comes out of nowhere and sneak's in between shroomfelt, and X-box Daye for the followup jam!!! (also setting the Pilot track team high-jump record as he use's Bouldin for a landing mat)

Portland win's, Coach Rev actually smiles outside of Practice,the PILOT'S ARE THE LEAD STORY ON ESPN.T.J. and Nik are voted Co-MVP's of the WCC tourney!!!


Stonehouse and Clay are carried off of the court on Jasonn's and Big John's shoulders. Everybody proceed's to the pool for the afterparty there. Stonehouse is promply thrown in the Pool by everybody that had to watch his "WALLY" video, J/K stoney.

Stonehouse stay's on in Vegas to become the head of the biggest sportsbook in Town, with his 2nd job as Casino host at the Orlean's.

-how's that for Emotions guy's

We seriously have to hit better than 52% of our free throws against the Pepperdine/San Fran. winner. Luckily 52% is much worse than our season average, so we were out of character against SCU. Hopfully, Rev will get the guys to practice them during the time off because of the bye.


So, Mills has one more week to rehab if he's going to try to come back against us. I hope he comes back. I want to beat everyone at full strength if we are going to take this thing. I don't want any astericks by our name in the WCC record book. If we do it, we're going to do it right.

Hey isn't Clive going to be inducted sometime during the tourney into the Hall of Honor? When will that happen?

Off topic, but, this is similar to the new commercial that was on during last night's game. (At least, I think it's new.) Except the one in the game had Eric Spoelstra in it too...as the Miami Heat Coach. It's was so cool to see Dr. Herman Asarnow (one of my favorites), the women's soccer team, and Spoelstra in a commercial together. This one is similar:

Good commercial, I know the English Prof. is your favorite part. But fill in the blanks what the PRES. is saying to TJ and the "boy's".Now come to service on Sunday, and for goodness sake MAKE YOUR Free Throws during your basketball game,lol.