I know we are all focussed on the Tournament and all, But we have other Pilots fighting for a championship and glory for UP.

The Amigas leave tomorrow to try and win the Cup. The first stop is California and a game at the Home Depot center against Korea (S.?) on Wednesday as a tuneup.

Then they leave for Chile for what I am sure will be a great tournament and a great time. Let's wish them the best, thank them for the leadership they showed this young team this year, and we look forward to their contributions to what I hope will be the Fourth UP championship next year.

Yeah its South Korea. The North goes by DRNK (Democratic Republic of North Korea). I doubt we would see them in the US because they had their delegation under lock and key so none would defect and that was in RUSSIA. At the U-20 WCC they bused all their "fans" in and out. It was a large group that was obviously subsidized by the government to cheer their side. The U.S of course all paid there own way and were high spirited but few.

Change in travel plans- no game with Korea today. They went straight to Chile.

Just thought I'd post the link to the ESPN writeup...

They single out Keelin as the driving force of the midfield, Eli'sr great versatility and Michelle as the most decorated leader of the strike force...

Best of luck to our Pilots and not to mention the rest of the squad, I'm sure they will all make us proud 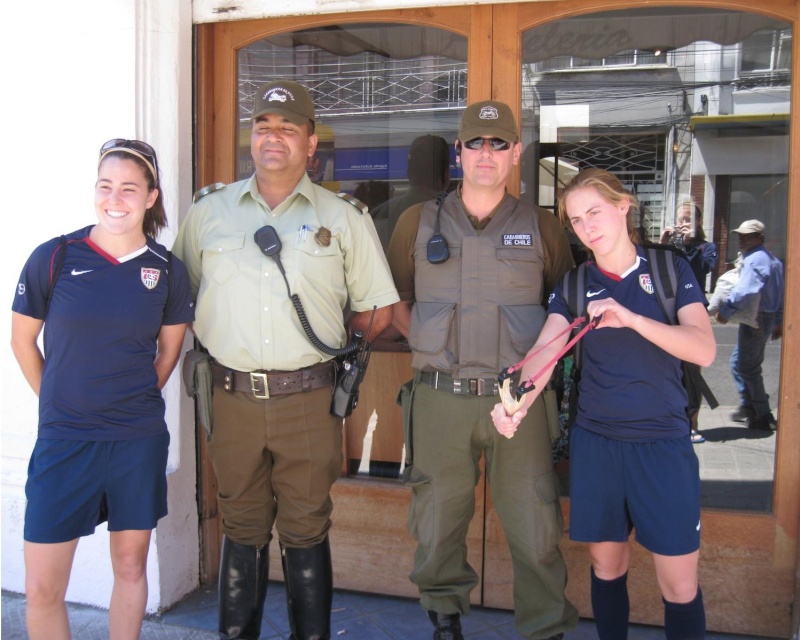 Well..... we have arrived here in Chillan and are definitely settled into our surroundings. Our first night here we walked around a bit to get our bearings in the new city. We’re really close to a park, and there happened to be a festival going on with bands and dancers and what not. It was pretty good timing on our part. Naturally we stayed to see what was going on and take in some local flavor.

It was really funny. The band started playing YMCA and our team was super excited that we knew the song, but apparently no one else knew it. We were doing the dance and screaming and everyone looked at us like we were idiots. It was more like Y….. isn’t anyone doing this?

We were then tricked into going onstage. Keelin served as the translator. She haven’t taken Spanish in three years. We thought they were just going to give us front row seats but those seats came with a price. She thought she was doing a pretty good job of translating but all of the sudden we were going up on stage. Baxter, you know I don’t speak Spanish (name that movie). Apparently people here love us though so that’s nice.

People here seem really interested in the tournament. There are signs everywhere promoting it and everyone knows who we are when we’re walking around. When we pulled up on the bus from Santiago, there was a huge crowd waiting for us. There is also quite a bit of media attention as well, including an insert in today’s paper all about the tournament.

We went to the market, which was cool. We don’t really know how anyone does any business because they all sell the same things. Really cool things, yes, but it’s mostly the same in every shop. We bought a few things, including a sling shot. Later we used the sling shot to shoot Tootsie Rolls at inanimate objects – that made the maids laugh. We’re going to try to get marshmallows to shoot at people.

Other than that we’ve been doing a lot of homework. Keelin also plays the guitar a lot and is teaching Nikki Washington how to play a few things. She’s only been playing for three months so her Mom told her she had to learn how to play a Christmas song. For some reason she thought Silent Night would be a good choice but it really wasn’t. She is trying really hard to hit the high notes though.

So, our game is apparently on ESPN2. Live. That’s freaking sweet. We hope all of our friends and families to be able to watch. It’s a really big step towards getting people at home interested in this tournament and we couldn’t be more excited about it.

Keelin says their game is on ESPN2 - Live! Is that on November 19th?

Does anyone know what time?

I have been looking at the national team website and trying to figure it out. I THINK it is live on ESPN2 Wednesday (tomorrow) at 1:00 normal time (10:00AM for you in the west) and delayed on Galavision at 6:00 my time. The site is not real clear on this, at least to me, but I think that's correct.

Here is a chance to vote for Michelle Enyeart US Soccer Performance of the year http://ynt-ussoccer.blogspot.com/ other awards available for best fan photo, best bar. Check it out.

Enyeart and Kells -- that's my idea of a winning ticket. Consider me a party loyalist.

Don't forget, troopers - the opening game of the u20 World Cup is today.

You can watch your favorite Pilots World Cup team on ESPN2 at 10:00 AM Pacific.

There is also a match tracker on ussoccer.com , lets just hope it is better than gametracker for all of you cubicle monkeys like me.

I have to do SOMETHING about the fact that you guys get to see the Pilots in person and I can't.

So, Aleppiek, 4 minutes to game time, and I have to go watch now.

I wish that ESPN360 wasn't such a racket too.

You know, there are a lot of sites where you can stream ESPN2 live for free... you just have to download some random software.

Dodgy first half. Morgan hit the post in the first minute, and michelle had two chances, too.

Naeher looked really uneven in the goal. She came out to challenge two balls into the box and flat out missed them, and held the ball and almost gave it up to an onrushing forward - just ugly. You have to wonder why she's in there....

Unbelievable miss by France about halfway through first half. Open net about a yard away and she somehow shanked it over the top.

I agree with your overall assessment, Geez. They say it's brutally hot there, which might be slowing them down a bit.

The second half turned into the LeRoux show. She came on for Michelle and tallied 2 goals and an assist.

Ellie came on late for Washington, and got herself in the record books recording the first yellow of the tournament.

Why that was a card and the hit just before on Winters wasn't, I don't know.

Naeher looked much better and got a couple great saves.

Keelin gave me a very big scare watching her writhing on the turf. Was really happy to see her ok.

Did you notice whenever they showed a picture of the stands like 95% of those in attendance had moved up toward the top of the stadium so they could be in the shade?? Both teams definitely looked to be running a bit slower than they were capable of, it should be interesting how the climate affects teams throughout this tourney...