How does the novel start?

This is a pretty good team. they seem to be playing quicker and the short passing game is pretty good for the first game of the season. We won more balls, were quicker to the loose one, were better in the air, and had better vision than they did.

Frankie is a total stud. Two goals off nice passes and a Zidane twirl all in one 90 minute span. The question we need to start asking is which Bundeslige team we need to start rooting for. he looks quicker and a lot more confidence than last year, when he deffered to to Alex and the others.

Colin did a great job of winning balls in the midfield, distributing - just great. and he and the other mids controlled the center of the field.

The defense is for the most part solid, except for the two mistakes I mentioned (truth be known, one was just a great play on the part of VA Tech.) The freshman defender (Kuwulok? - it's going to take a game or two) looks like he'll be pretty solid. I think the defense is better than last year. Leland is still the fastest guy on the field. I'd like to see him get a couple more touches up top. He played there at the end of the game, and I think he looked dangerous.


By the end of regulation, we had outshot Va Tech something like 17-5,. They started catching up in overtime, but not many quality shots, really.

All in all a promising start to the season. Yeah no one wants a tie, but that was a pretty good team, and we outplayed them.

A couple issues need to be addressed. Conditioning looked a bit weak from a couple guys. Even before the game ended, there was some cramping and a couple guys stopped running up top. It didn't seem that warm ( I wore a thin pile sweater by the end of the night) but cmon, guys, Va Tech looked fitter.

Austin scared me a couple times, but I don't think he really did any damage taking his chances, and I don't want to discourage him helping the defense by coming off his line. He's still a soph - he'll get smarter.


This team is fun to watch. They should have a nice season. Boom Ball is gone, attractive soccer is back .

Well, I thought we looked good for stretches, especially in the first half when we put together some great chances. The finishing will come along soon, I'm sure. VT's defense did a good job of limiting the Pilot attacks once the ball got down around the goal.

This team does look fun to watch. I haven't seen much soccer since I graduated, but I certainly will be back for more.

It was a pretty good game. I hadn't seen the men in action since Kasey Keller was roaming the Bluff, so I wasn't sure what to expect.

We sure did outplay Virginia Tech, especially in the first half. That was a gut-wrenching goal when Guerrero was chasing the ball from behind and couldn't get to it.

I agree with you Geezer; they do play fast.

Okay, those of you who could see it: In the first OT, how did the ball not go in the Pilot net in the midst of all that activity? I was sitting behind the other goal and all we could see was Austin diving back toward the goal line to save it--a great play.

Yeah, that time it worked out a lot better than the one that got away in regulation.

I was at that game myself. The Pilots clearly out played VT. However, there wer some issues: Seemed like VT was able to hang on to the ball during their possesions for way too long at times and it seemed like the Pilots were being shoved off the ball by smaller players a lot. Also it seemed like the Pilots couldn't finish very well. The had a WHOLE bunch of golden oportunities including at least one open net that they couldn't even come close to finishing. My guess as to what Bill Irwin is going to have his team work on in practice: Regaining possession and finishing. All in all, this year looks VERY promising for the pilots!

By the way, it must be said: I held my breath every time #9 for VT touched the ball. He was very dangerous around the net!

PurplePrideTrumpet wrote:Okay, those of you who could see it: In the first OT, how did the ball not go in the Pilot net in the midst of all that activity? I was sitting behind the other goal and all we could see was Austin diving back toward the goal line to save it--a great play.

It definately took a Pilot bounce off the post - must've hit dead center. I was in the Pilot Club area so I couldn't really get anything but a side view. While that guy (#9) was fast, I wasn't overly thrilled with our defenders' ability to cover him.

Frankie was awesome...let's hope he actually stays to play for a few more years, the men have a habit of getting really good, then leaving. I think Brian will settle in and start finishing his shots soon (Sunday, maybe).

Somehow I think we will see more of Frankie up top and less of Hossenmardi, I liked the flow of play a lot more once Frankie moved and Nielsen want to the outside.

and btw, I have been watching Frankie play sports for about 16 years... Referreed him in park and rec youth soccer, umpired in little league. Watched him significantly in club soccer. The one thing that I know about Frankie is he when comfortable and confident is really really dangerous! Not trying to be captain obvious, but I have never seen a kid that has as much will to win, he will totally put a team on his back when he feels the time is right. 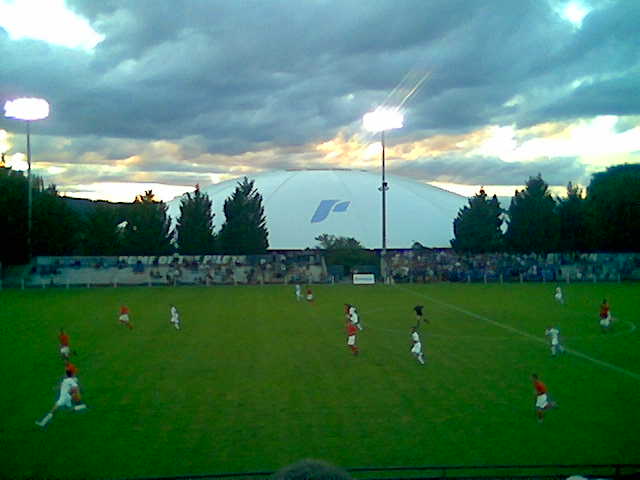 Here's a pic I took of the purple "P" on the side of the Chiles Center. I gotta say, I was really nonplussed by the plain white dome last week vs Oregon (it's been that red color longer than I can rememeber), but that "P" really adds something to it. Really sharp, IMHO.