Anytime we play Gonzaga in any sport it’s worth watching, so I headed out to the rainy, windy UP campus this afternoon to watch our Men’s Tennis Team open WCC play with 4-3 win over the Zags.

From the UP Athletic Department (edited):

We got through a tight one today,” Portland head coach Aaron Gross admitted after the match. “We played really good doubles, which really proved to be the difference in the end. Geoff Hernandez had a great day. Besides playing one of his best doubles matches, he came through with a really big win at the #2 against a good opponent.”

“I really like where our team is right now,” Gross added. “We aren't playing great, but are competing well and improving steadily. My hope is that we will be playing some of our best tennis in late March and April.”

Gross continued, “We will take the lessons from these tough matches and apply them in practice to become better. Plus, we surely will have close matches later in the season and this experience will help us when those come up."

In the midst of a five match winning streak, the Pilots conclude their six match homestand on Thursday as UC Irvine comes to Portland for an 11 a.m. match.

At least there’s still a cross-town rivalry in something!

With the victory, the Pilots improve to 8-2 on the year while dropping Portland State to 2-10.

The Pilots continue their homestand on Monday with a 9:00 a.m. match against Weber State, which will play Portland State on Sunday. It will be the third match in as many days for the Wildcats and the third in four days for the Pilots.

What? Is Monday a holiday or something?

Both UP and Weber State are on Spring Break so neither needs to worry about missing classes.

I was also surprised by the early scheduled time and a suggested idea was the local tennis academy might be using the LPTC for practice.

The Portland Pilots men’s tennis team won the doubles point for the 12th straight match and the top four singles positions recorded victories en route to a 5-2 favorable outcome for the Pilots Sunday at the Louisiana-Pacific Tennis Center against the Montana Grizzlies.

Portland ups its record to 10-2 with the win. With a 9-1 home record, they now head back into WCC play after beating Gonzaga over a month ago in their only WCC action to date.

Portland is at home this coming weekend against San Diego and Saint Mary’s, Friday (10:30 am) and Sunday (10 am).

Prep Tennis Preview from the Oregonian:

In 5A boys, Paxton Deuel of Summit is the prohibitive favorite to take down his second consecutive state title. Deuel is the top-ranked USTA player in Oregon, and has signed with the University of Portland.

“Paxton is completely devoted to the sport, working on his game three or four hours a day,” said Summit coach Josh Cordell. “It would be easy for him to not play high school tennis, but he’s very committed to our team.”

Vancouver Prep Crossing the I-5 Bridge

Another fine recruit heading to UP in late summer.

From The Columbian (edited):

Vancouver’s Skyview tennis player Kent Andreasen made a significant change this year, shifting from a two-handed backhand to a one-handed stroke. One thing, however, did not change — his results.

For the third time in his high school career, Andreasen won the district tennis championship. The senior also finished second in the regional and state finals, making him The Columbian’s All-Region boys tennis player of the year for a second consecutive year.

“I struggled. I wasn’t very consistent with my two-hander,” Andreasen said. “I think the one-handed backhand worked out pretty well.”

Andreasen lost just two singles matches all year — both to Federal Way’s Mitch Stewart in the aforementioned finals. His prowess was impressive enough to earn him a scholarship to the University of Portland, where he will attend next fall. 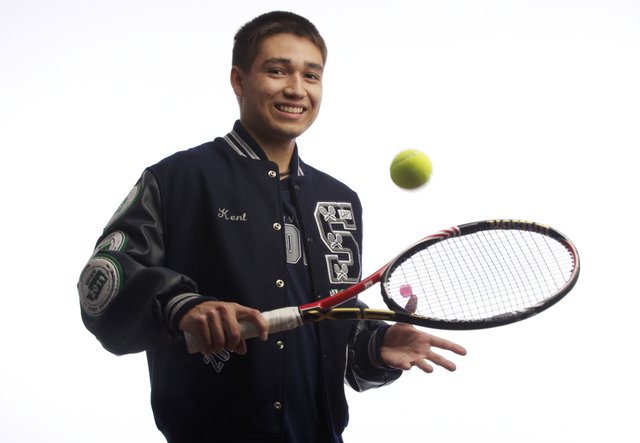