Anything to the rumor he's transferring to U of O? ekrauss, anything?

This is really sad. The guy's dad ran at UP and yet he's transferring to become a Duck. Very strange. I hope there is a honest reason for this. Transferring is not common for runners, especially high profile guys like Dunbar.

Any reason why? UP ran better than Oregon this year...

If my facebook feed is any indication, not everyone is happy about this.

I obviously hate to see us lose a talented runner like Trevor but it's salt in the wound that he's transferring to the Ducks.

And who should have one of those one-page profiles in Portland Magazine? Guess it went to press right before this news.

Anyone see this nice little piece on Dunbar in the latest Portland Magazine?

Anyone see this nice little piece on Dunbar in the latest Portland Magazine?

That's the one I was talking about. Terrible timing.

It was nice to see Phil on the inside back cover.

“I’m not sure I should comment on how I feel,” [Conner] says.

“Trevor would have gone there had they offered a scholarship or even called him out of high school,” Conner says. “I did, so he came here. Now he’s good enough to get a scholarship down there.”

"I’m excited about being part of the Pilot Nation." - Terry Porter

Article in the O discusses Dunbar's transfer. His reasons are not out of line. Wish he would have rejected the Portland magazine feature, though. LINK

Conner granted Dunbar a release in December so that he would be eligible immediately to run for Oregon.

Dunbar will compete indoors and outdoors for the Ducks as a redshirt sophomore this year after helping Portland to an eighth-place finish last fall at the 2011 NCAA cross country championships.

In two-plus seasons at Portland, Dunbar put together a nice resume:

-- He was the second-highest finishing non-African at the 2010 IAAF World Cross Country Championships.

-- He was the 2010 NCAA West Regional cross country champion.

Conner runs one of the best distance programs in the country on a shoestring, which, ultimately, became part of the problem.

The Pilots don't have a track. So Conner concentrates on cross country. He sometimes jokes that the outdoor track season is spring cross country for Portland.

He and his hardy band of distance runners spend the winter and spring shuttling around town just to get in their track workouts.

Dunbar increasingly saw his future on the track, in the mid-distances.

"Our deal is mainly long distance," Conner said. "We can do all-long distance on a cheaper budget than we can do anything else. If we're going to go to just three big meets, that's OK as long as we're long-distance oriented. If you're mid-distance, you need more."

The Ducks have their own track, fabled Hayward Field. They have home meets. They have a high-profile conference meet. The outdoor track season is a big deal in Eugene.

The 2011 outdoor season was frustrating for Dunbar, who battled injuries.

Conner said Dunbar came to him in late August and said he was contemplating a transfer. Conner said he asked only that Dunbar compete for Portland in the 2011 cross country season.

When Dunbar said he would, Conner gave the transfer his blessing.

Seems to me this should be a wake up call to the AD that any riverside expansion plans should include a track that is (at the very least) viable for training purposes, if not for full competition. He cannot be the first to lean away from UP because of this deficiency, and certainly will not be the last...

Conner has proven that you don't have to have a track to be a stud 10K/5K guy. But I can understand why a 1500m runner would want a real track to work out on (the one in the neighborhood, forget the school name, really sucks and the one downtown isn't much better). I just wish Dunbar had gone to Oregon originally if that's what he was into. I don't believe he couldn't have made the team or whatever, given his impressive HS resume. Maybe money was an issue though.

DaTruRochin wrote:Seems to me this should be a wake up call to the AD that any riverside expansion plans should include a track that is (at the very least) viable for training purposes, if not for full competition. He cannot be the first to lean away from UP because of this deficiency, and certainly will not be the last...

A track is in the plans, at least the original plans the University put out when the property was bought. 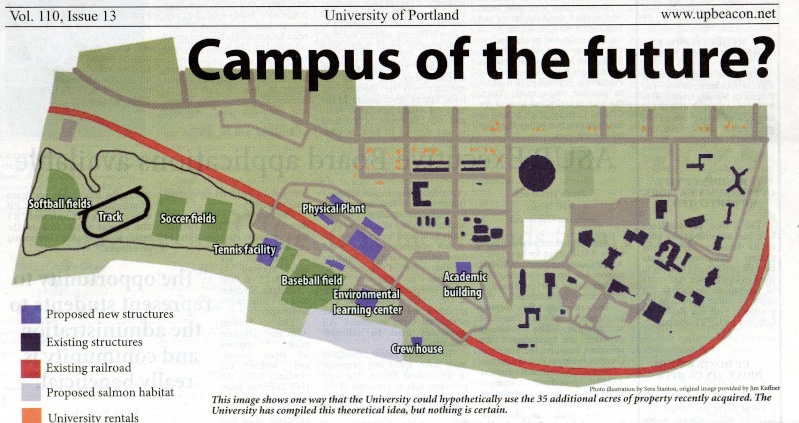 All we need is a financial kick start. How about DTR field? 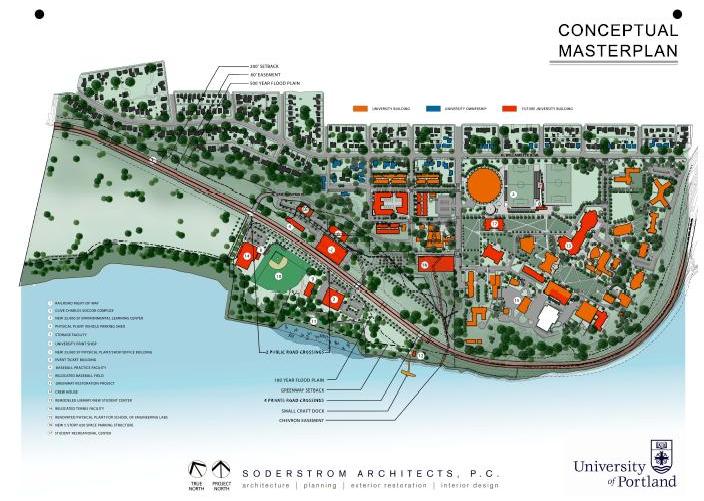 Putting a track down there is definitely a possibility, but it's a long way off... and the first step is UP acquiring the land.

Do you have a link to a bigger version? I dont believe I've seen this one before.

Well Geez, the statutory period for adverse possession in the state of Oregon is 10 years... So if you wanted to stake a claim and start building a track now and hope the current owners don't notice....

DaTruRochin wrote:Well Geez, the statutory period for adverse possession in the state of Oregon is 10 years... So if you wanted to stake a claim and start building a track now and hope the current owners don't notice....

The best part about it, is that nobody knows who owns the property!

Also, lots of good info here about the River Campus:

One more reason to despise U of O.

Geesh...Why didn't Dunbar think about this when he was deciding on a school? He must have been recruited by U of O as well.

UofO didn't offer him a scholarship. Up did.

That's true, but, he said that the scholarship wasn't an issue or a factor when he decided to transfer to the U of O. If that's the case, he should have just walked on with the Ducks in the first place.

I just get tired of people who say all of the right things in sports during an interview...like what Dunbar said to Portland magazine pretty recently...and then go off and show that those were just words. It's like the Dennis Erickson syndrome...a guy who said that he would like to coach in small towns like Corvallis or Pullman for the rest of his life. Yeah right!